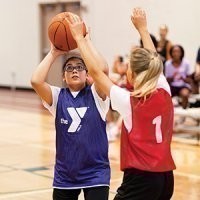 The Summit YMCA's 14U Travel Basketball Team was invited by the New York Knicks to attend their game against the Boston Celtics on Thursday, January 6, 2022 at Madison Square Garden in New York City. Players and their families were invited to sit courtside during the pregame shoot around and learn how the pros warm up before receiving their own jerseys and taking the court themselves.

Led by Coach Kareem Douglas and Coach Danny Cottle, the players split into two teams and faced off in the heart of Madison Square Garden on the very same court the pros they look up to play on. They got a taste of the big leagues in an 8-minute game where they showed the skills they've developed throughout their years on the Summit YMCA Basketball Team while family, friends, and the MSG crowd cheered them on. After the game clock had expired, the players made their way to their seats to watch the home team Knicks defeat the Celtics to end a night they'll never forget. 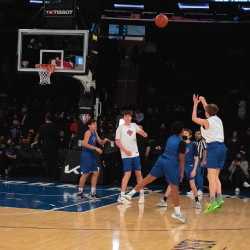 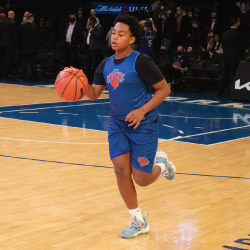 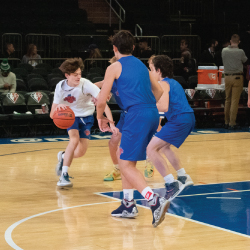 The team and coaches have been together for two years and more, originally starting out at the Summit YMCA on the 12U Basketball Team. Through years of teamwork and camaraderie, the players continue to develop and show the Y values of honesty, caring, respect, and responsibility while gaining skills and confidence on and off the court.

The partnership between the Summit Area YMCA and the New York Knicks was established by Summit Area YMCA, Youth & Sports Director, Allison Zeimann who organized and led the unforgettable trip to New York City. Through this partnership, the New York Knicks are scheduled to visit the Berkeley Heights YMCA in the near future to host a special basketball training clinic for the youth in our sports programs.

The Summit Area YMCA has basketball programs for all ages and levels. We teach the basic skills and rules of the sport, while also focusing on the important values of sportsmanship, teamwork and more. Join a clinic and improve your skills, join a league to compete and unleash the basketball star inside you or shoot some hoops and enjoy a friendly game with other members during open gym!

In 1886, we were founded as the Young Men's Christian Association, but today, we are The Y. An association that values, and is made stronger by, its diverse people. We stand for youth development, healthy living and social responsibility — For a better us. We are committed to creating equal opportunity for all regardless of gender, age, disability, income, ethnicity, sexual orientation or religious affiliation. We strive to create a welcoming and inclusive culture in which our four core values — responsibility, honesty, caring and respect — are integral to everyday operations.

Each year, as one of the area’s leading 501(c)3 charitable organizations, the Summit Area YMCA serves more than 15,000 individuals with our free and fee-based programs and services in an area spanning the New Jersey communities of Berkeley Heights, Gillette, Millburn, New Providence, Short Hills, Springfield, Stirling and Summit. Our history is rooted in working side-by-side with our neighbors to ensure that everyone has the opportunity to learn, grow and thrive. Through the generosity of our members, donors, and partners, we are able to offer financial assistance for our programs and services to those in need.