The sport of Basketball first started at the YMCA in Springfield, Massachusets, by a Dr. James Naismith in 1891 who wanted to design a game that could get young athletes active and conditioned in the cold months—the worldwide athletic phenomenon as we know it started with two peach baskets and a ball at Springfield College. Since its invention, the sport has been incorporated with the YMCA, and at the Summit Area YMCA, our Basketball clinics, programs, Youth Basketball Leagues and summer camps have been teaching kids the important values of sportsmanship, confidence, teamwork, respect and more for generations. 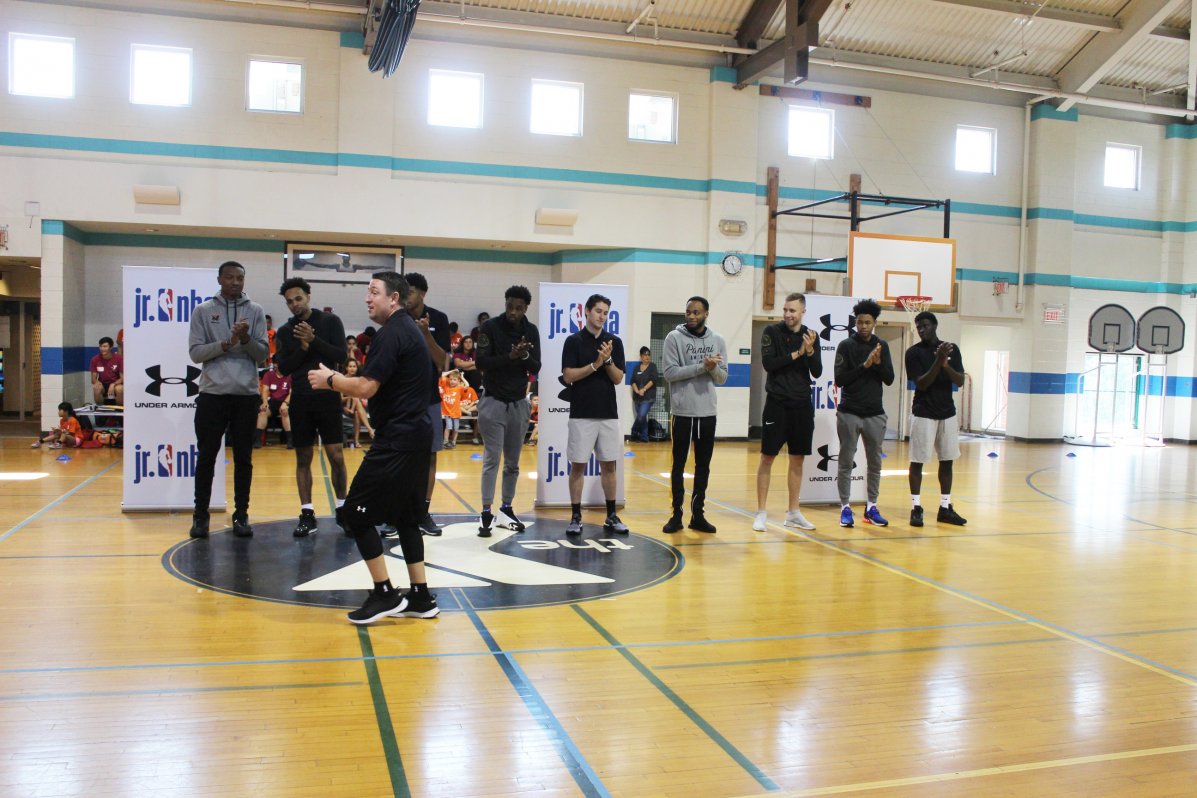 “When I speak from the heart, I want to come out here and give back to you all, I want to help you all so you can eventually get to this level.” Said Wendell of the Chicago Bulls when asked about why the Jr. NBA decided to visit the SAY. “So I feel like if you just come in with the right mindset, eyes and ears, and you try to play as hard as you can, you can definitely learn a lot.”

Other players spoke about the important facets of basketball, including respect, communication and teamwork.

“How many of you guys like to win? You guys like to win?” asked Chandler Hutchison, NBA player for the Chicago Bulls. Hands of excited campers shot up around the room, some waving happily at the towering figures of the basketball superstars. “Well in order to do that, it starts with team work. You know, you’re not gonna win by being a selfish player. Scoring points and everything is good, but if you have a better teamwork, you communicate, you work as a team, you’re gonna have a lot better advantage and put yourself in a good position to win.”

When asked about the importance of respect, Ryan Arcidiacono of the Chicago Bulls said, “Having respect for your teachers, your coaches, your teammates is just important to be the best teammate you could be. My coaches all had an impact on me when I was a young kid, it’s important to keep a positive attitude and respect your teammates. After a tough game, you just got to look at each other in the eye and say we didn’t have it today but we have to move on. You can’t control what happened in the past but you can only control your attitude as you move forward. You always respect your opponent too, yes you all want to win, no one likes to lose but if you end up losing you just gotta shake hands and congratulate them.”

NBA players and SAY Campers were then separated into groups with two players per group to supervise and help run drills and games. From shooting hoops to dribbling, from blocking to passing, campers were able to play basketball and engage with the pro players in the Summit YMCA’s Hubbard Gym surrounded by encouraging staff and Summer camp counselors.

To learn more about Basketball programs at the Summit Area YMCA, please visit: www.thesay.org/youthsports and https://jr.nba.com/ for more information about the Jr. NBA.

About the Summit Area YMCA
The Summit Area YMCA is one of the area’s leading 501(c)3 charitable organizations. Founded in 1886, the Summit Area YMCA has a history steeped in working side-by-side with our neighbors to ensure that everyone, regardless of age, income and background, has the opportunity to learn, grow and thrive. Each year, we serve more than 10,000 individuals with our free and fee-based programs and services in an area spanning the communities of Berkeley Heights, New Providence, Millburn, Springfield, Short Hills, Summit, Gillette, and Stirling. Through the generosity of our members, donors, and partners, we are able to offer financial assistance for our programs and services to those with demonstrated need.